Yes, we’ve done it, we’ve finally got away from and the fast flowing .  We are now a few miles up the Oxford Canal North of the city of .

The river is still in spate with red warning boards down most of its length so how have we managed to get away?  Last Wednesday a curious rusty tugboat arrived from and moored on the opposite side of the river.  The following day David went to speak to its skipper, Steve, who explained he had been called to rescue the boat on its side pictured in our last post.  David enquired whether it would be possible for the tug boat to tow our two narrow boats back to and the answer amazingly was ‘yes’.  So later that day we were towed just over a mile up river to Benson and moored above the lock for a day because Steve was busy on Thursday.  He returned on Friday morning and towed us all the way to against the strong stream with red warnings all the way.  Several lock keepers gave Steve a strong mark of confidence saying he was the only person who they would trust to do this. 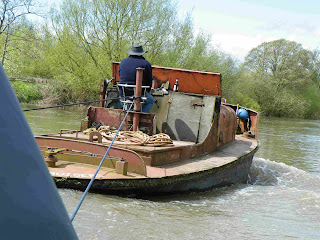 The waves between the boats from the propeller wash of the tug was something worth seeing: 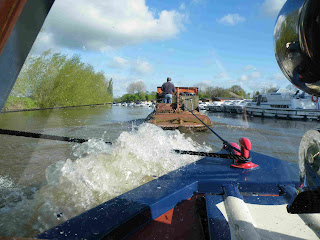 As the day went on our confidence in Steve grew.  His skill in pulling the two boats to avoid collisions with trees, boats and to stop us being swept away by weirs was amazing to see.  Though we both had our engines going fairly fast, in truth it was Steve and his tug that decided where we were going.  The bridge at Clifton Hampden was a real test with shallow water racing through the arch and a strong flowing stream beyond. 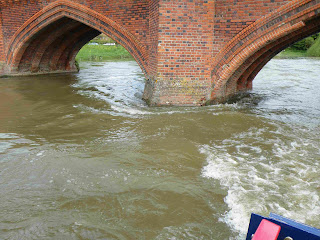 Abingdon bridge was similar but nothing prepared us for conditions in the city of itself.  At Oxney Lock Steve left Pas Mèche and took Leo alone past the two Oxney weirs which have a staggering pull to one side and then on up the narrow stream which was flowing more fiercely than we had seen anywhere, through the low Osney Bridge before making the final turn onto the Sheepwash channel which was a safe haven leading the start of the Oxford Canal at Isis Lock.  Here Steve left us to make our own way and went back to rescue Pas Mèche in the same way.
So we are delighted to say that now we are on the safe and navigable waters of the a few miles north of .  We are so grateful to Steve for rescuing us in this way and allowing us to continue our journey.  So far we like the very much with its narrow locks (only inches wider than the boat at around 7 feet) and its lifting bridges.  We are looking forward to more of this lovely rural canal as we spend the next few days travelling up towards the .