We've now left the Chilterns miles behind us and even escaped the clutches of Milton Keynes.  Tonight we are just above the 17 locks of the Northampton Arm which tomorrow should take us down to that city and the River Nene.

On Wednesday evening we moored below Ivinghoe locks with lovely views back towards the Chilterns. 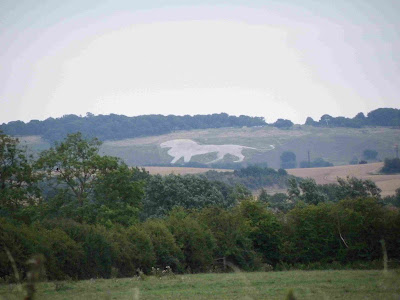 From close to our mooring we could see the Dunstable Lion on the hill.  He is quite a sight. 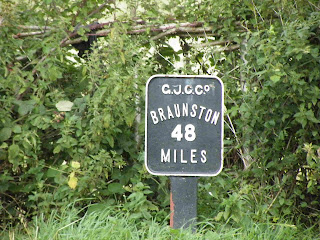 There are lots of these mileposts along the Grand Union and where we are now the distance to Braunston has come down to only 16 miles.  Avid readers of this blog will notice that we visited Braunston on our way to the Oxford Canal in May.


On Thursday we carried on with our descent passing Grove Lock.  Unfortunately it was rather too early in the day to patronise this welcoming Fullers pub: 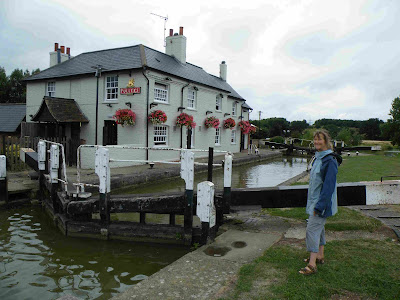 Here is the lock and the pub next to it. 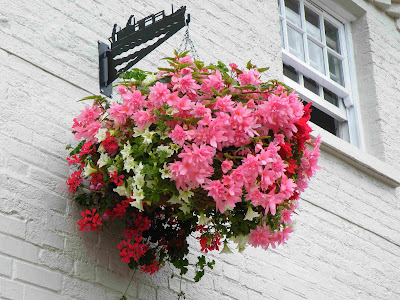 Here is a close up of one of the hanging baskets you can see in the picture above.  Notice the fine 'narrowboat' bracket holding up the basket.


On Friday we came down the Soulbury Three Locks and this picture shows the bottom one.  Two of these locks are so close together that they are almost a staircase and have to be treated the same way so that you do not let water out of the top lock before the middle lock is filling.  There is a danger of too much water going down the bywash leaving insufficient to fill the middle lock. 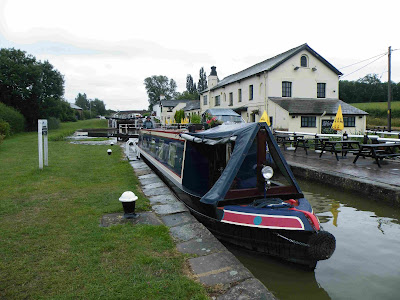 And so on Friday we came to Milton Keynes.  We have to confess that we did not really understand Milton Keynes.  The canal goes 'through' the city for miles and miles but the views are of green spaces surrounded by modern housing estates.  We asked locals where the centre was  and they had to admit that there wasn't really a centre at all.  We moored on Friday evening in Great Linford which used to be a village but, like others round about, has been swallowed up by Milton Keynes. 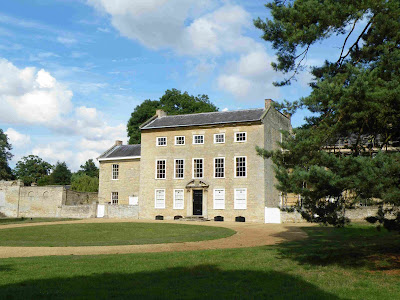 Here is the manor at Great Linford.  On the church door nearby was a spoof planning application by Noah for building the Ark.  The print is too small to read on this blog but one part read "The vessel will be constructed of cypress wood coated in pitch (or cardboard coated in paint if more readily available).


Wolverton had some canalside flats and some remains of previous industry.  One long wall by the canal had been painted with a mural of which this picture shows part: 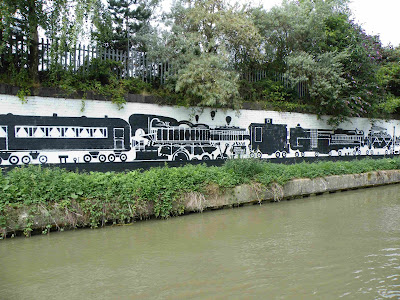 Finally on Saturday we escaped from Milton Keynes  and crossed the Iron Trunk Aqueduct over the River Great Ouse.  A first aqueduct was being built when the canal opened in 1800 but for the first five years boats had to go down 4 locks to cross the river and then up 4 back to the canal.  When the first aqueduct failed in 1808 the locks had to be used again for 3 years until the aqueduct was rebuilt. 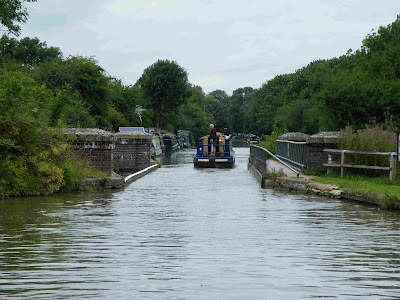 Here is the view approaching the aqueduct. 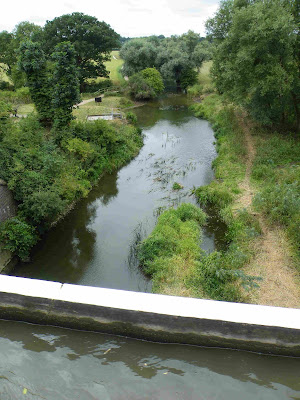 And here is the view down from the boat to the river around 40 feet below.  Like the Pontcysyllte Aqueduct in Wales only a narrow ledge separates the boat from the drop. 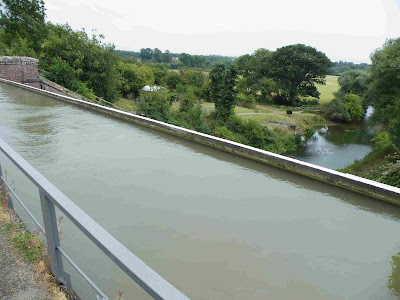 This photo was taken from the towpath when we walked back later and you can see how the pedestrians are protected by railings, unlike the boaters. 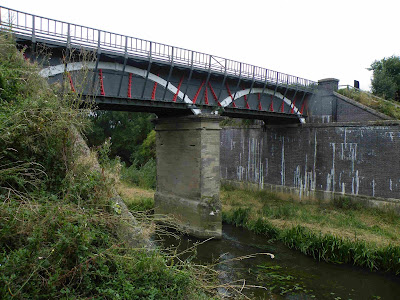 Here you can see the iron trough carrying the water resting on stone abutments and a central column. 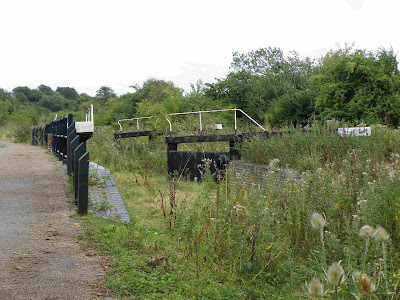 The route of the old locks down to the river can be followed and here is one of the old locks, though the gates don't really date from the early 1800s but have been placed back into position to show what the locks would have been like.


We had a lovely walk on Saturday afternoon around the local villages and through this tunnel for cattle (and people) in Cosgrove which runs under the canal: 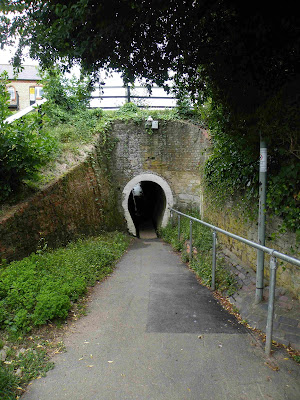 After a short day on Saturday we came up Cosgrove Lock on Sunday and, with Paul and Gail on Georgiana, we came up five of the seven Stoke Bruerne locks to moor below that village which is a bit of a mecca on the canal system: 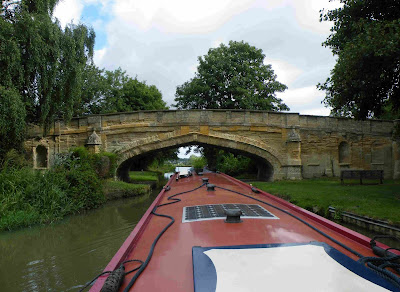 We liked this lovely ornamental bridge at Cosgrove.  No-one seems to know why it was built in such an extravagant style. 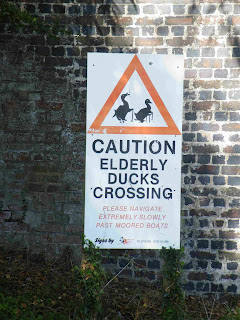 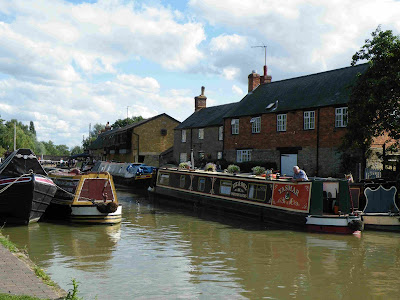 This photo was taken looking back towards the top lock at Stoke Bruerne. 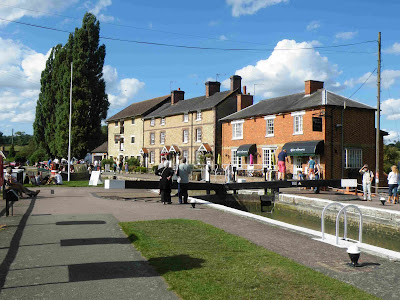 Here is the view of the top lock.  Behind it on the right is a very good Indian restaurant and take away which we patronised on Sunday evening and would certainly recommend.  Next to this are four cottages and our friend Kathryn (who owns our 'sister ship' Leo 2) lives in one and we spent much of the afternoon with her. 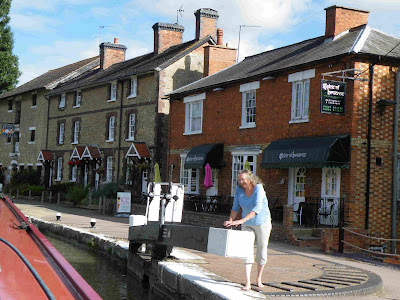 Here is Kathryn this morning coming out of her house to help us through the top lock.  It was good to see Kathryn and she seems very happy in her new house, well new to her at least. 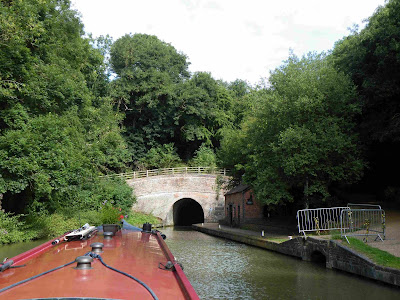 Within half a mile of Stoke Bruerne top lock the canal goes through Blisworth Tunnel which is the third longest on the system at around a mile and three quarters.  It took us about 35 minutes to get through.  There are some very wet bits under the ventilation shafts and some fine stalactites. 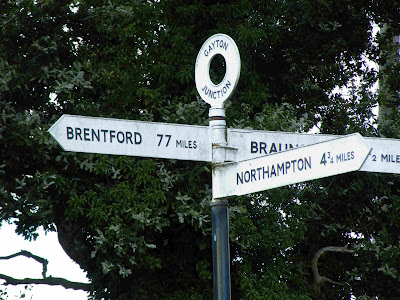 Above the tunnel is Gayton junction where the Northampton Arm turns off right down to the River Nene.  Here is the signpost at the junction.  The right arm reads 'Braunston 16½ miles'.

This afternoon we have been cycling rather than boating.  We've cycled further along the Grand Union beyond Gayton Junction to look for a suitable winter mooring for Leo.  I'm pleased to say that we have found a lovely little basin with 24 boats at High House near Nether Heyford and have now arranged for Leo to go there when we come back from the East Anglian waterways.

So tomorrow we plan to go down the 17 locks to Northampton and onto the River Nene.  These are the first narrow locks we've met since we came off the Oxford Canal at the end of May.  From Northampton we go downstream as far as Peterborough and then cross the Middle Levels to pick up the River Great Ouse all the way to Bedford.  Or at least that is the plan.
Posted by Ian and Helen at 14:18