Setting off on our 2015 travels

Well, at long last, we've set off on our travels for this year.

Having taken the car back home we set off from Skipton on Friday afternoon and cruised down as far as Silsden. 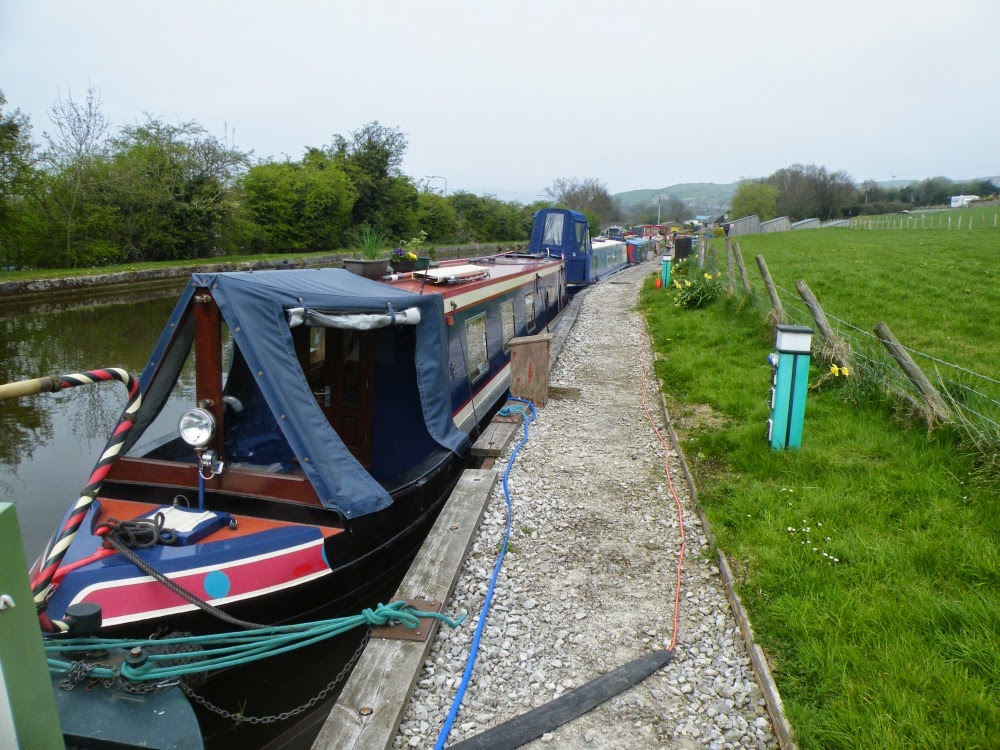 Here we are just before setting off, moored at Snaygill near Skipton. 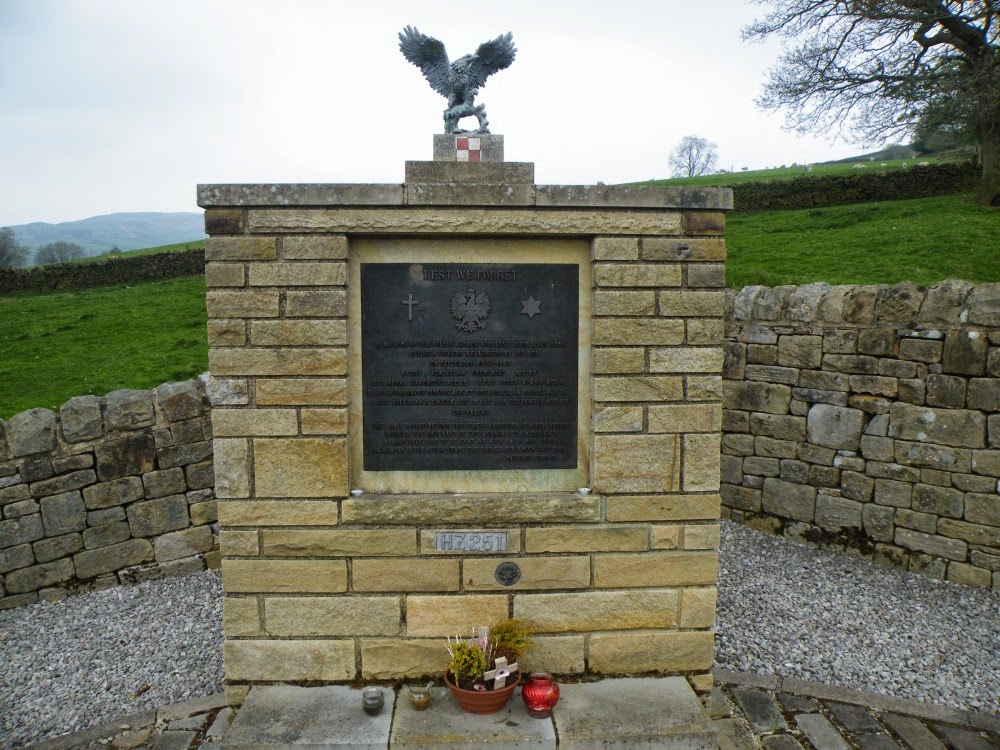 A couple of swing bridges down the canal is this memorial to a Polish aircrew whose plane crashed nearby on a training flight in 1943.  Very sad - all were killed and only in their early 20s. 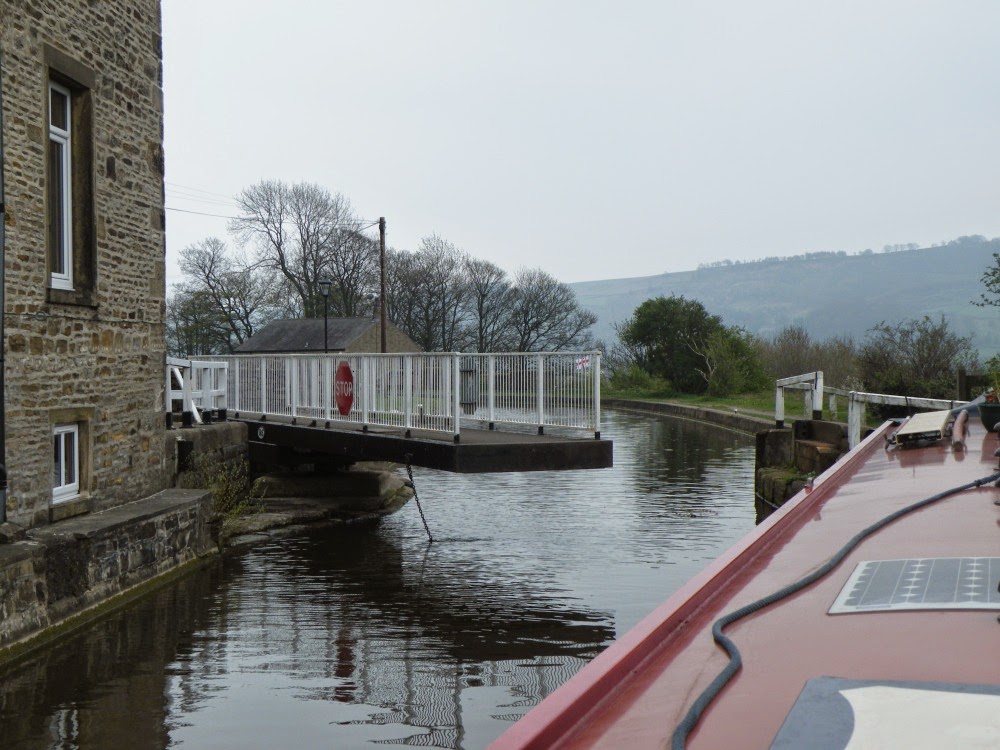 This is the swing bridge as you come into Kildwick.  We have been through here three times recently having done a couple of short day trips with neighbours onboard.  We patronised the White Lion at Kildwick both times and can highly recommend it. 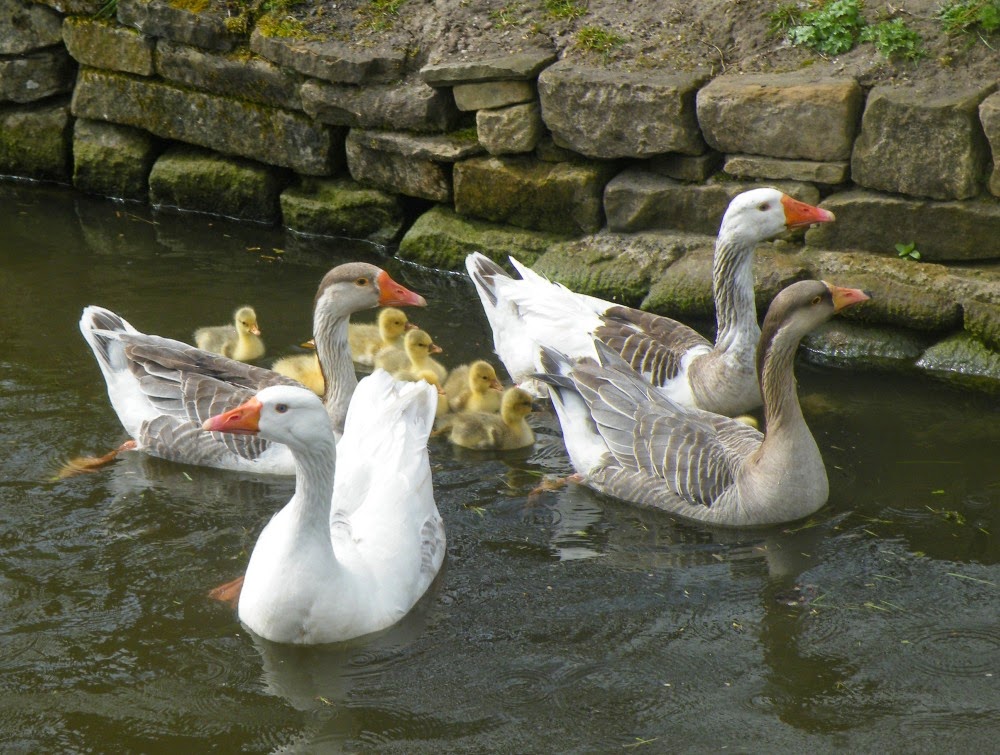 We've always admired the parenting skills of geese and here four adults are looking after a double clutch of goslings.  We've already seen ducklings and goslings and quite a few swans sitting on their eggs.

On Saturday we carried on the cruise stopping frequently to open the many swing bridges along this stretch.  Very few boats were on the move so we were not able to share the bridge opening.  We came down the famous Bingley Five Rise and Three Rise staircases of locks and moored just below by the Fisherman's Inn. On Sunday we stopped in Saltaire for a morning walk around this lovely village before moving on to near Rodley all ready for our descent into Leeds today. 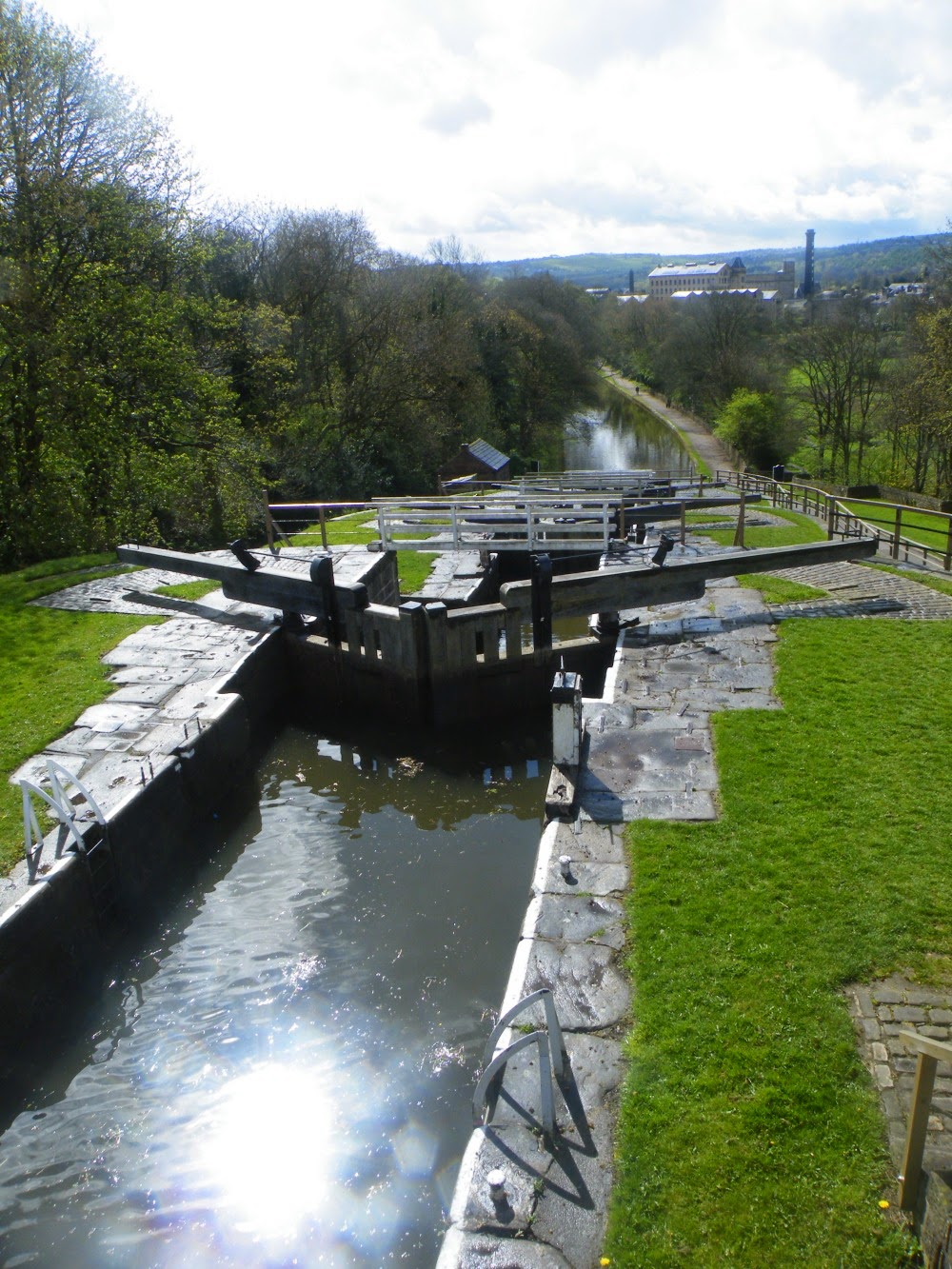 The Bingley Five Rise is a precipitous descent of 60 feet in 5 staircase locks.  This is the view from the top looking down to the chimney of the Damart factory which is at the bottom of the Three Rise which follows closely on the Five.

Fortunately there is a lockkeeper, Richard, here to help boaters through the flight. 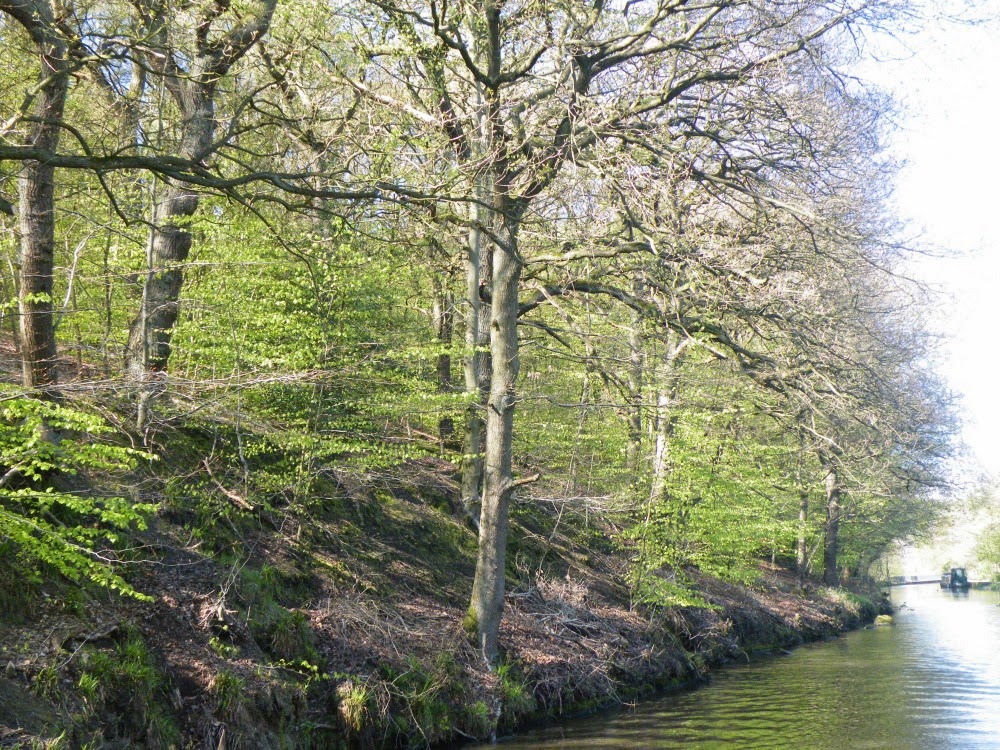 It is lovely travelling in the Spring and seeing all the luminous green foliage just emerging into the sunlight. 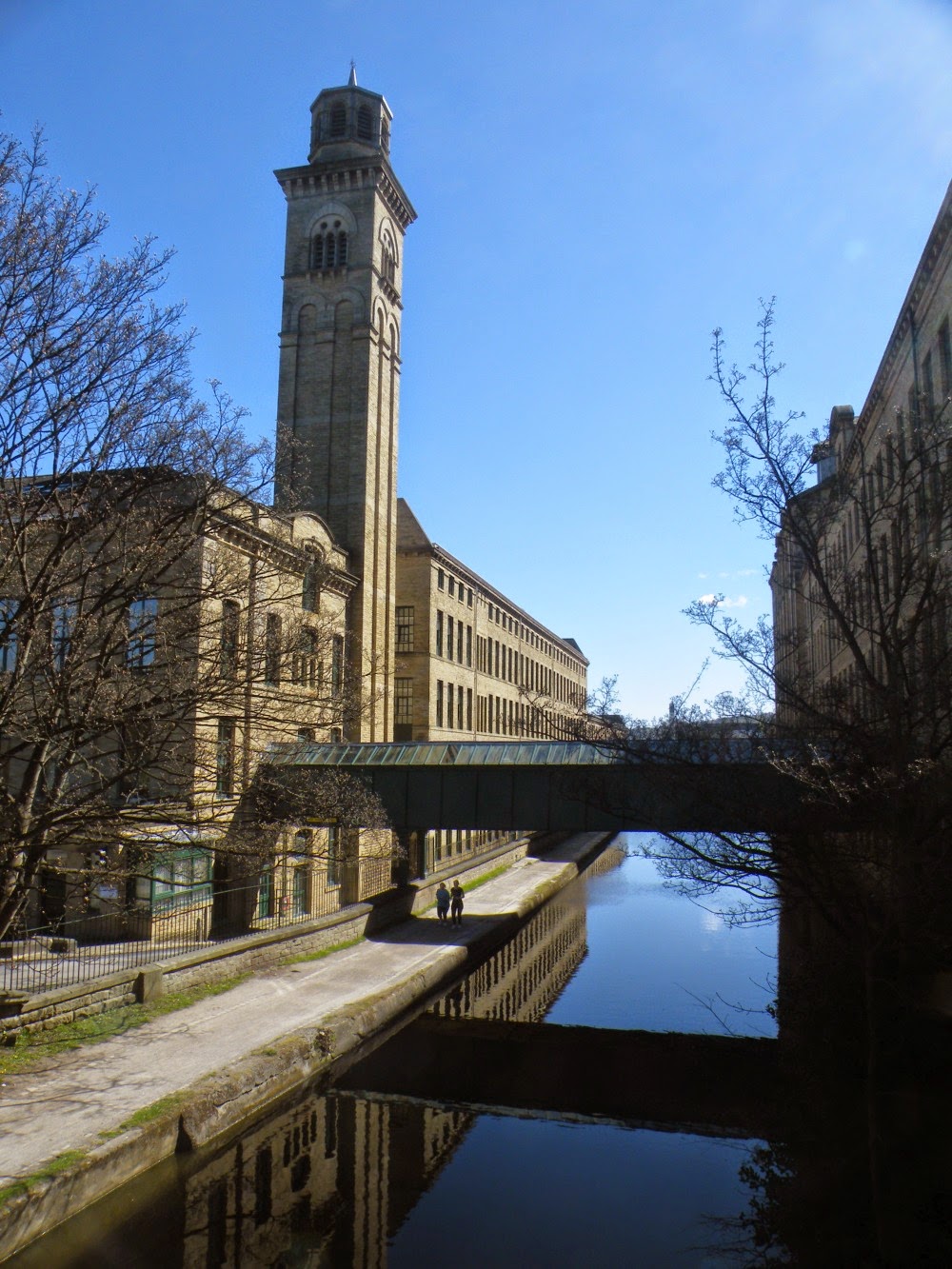 These mills at Saltaire were built by Titus Salt whose mills processed and spun the alpaca wool that came from South America via Liverpool and along the canal.  Salt believed strongly in the welfare of his workers and built a church, schools, houses and recreation areas and parks for his workers.  But there were no pubs because he did not want his workers drinking.  There is now a pub which is called 'Don't tell Titus'. 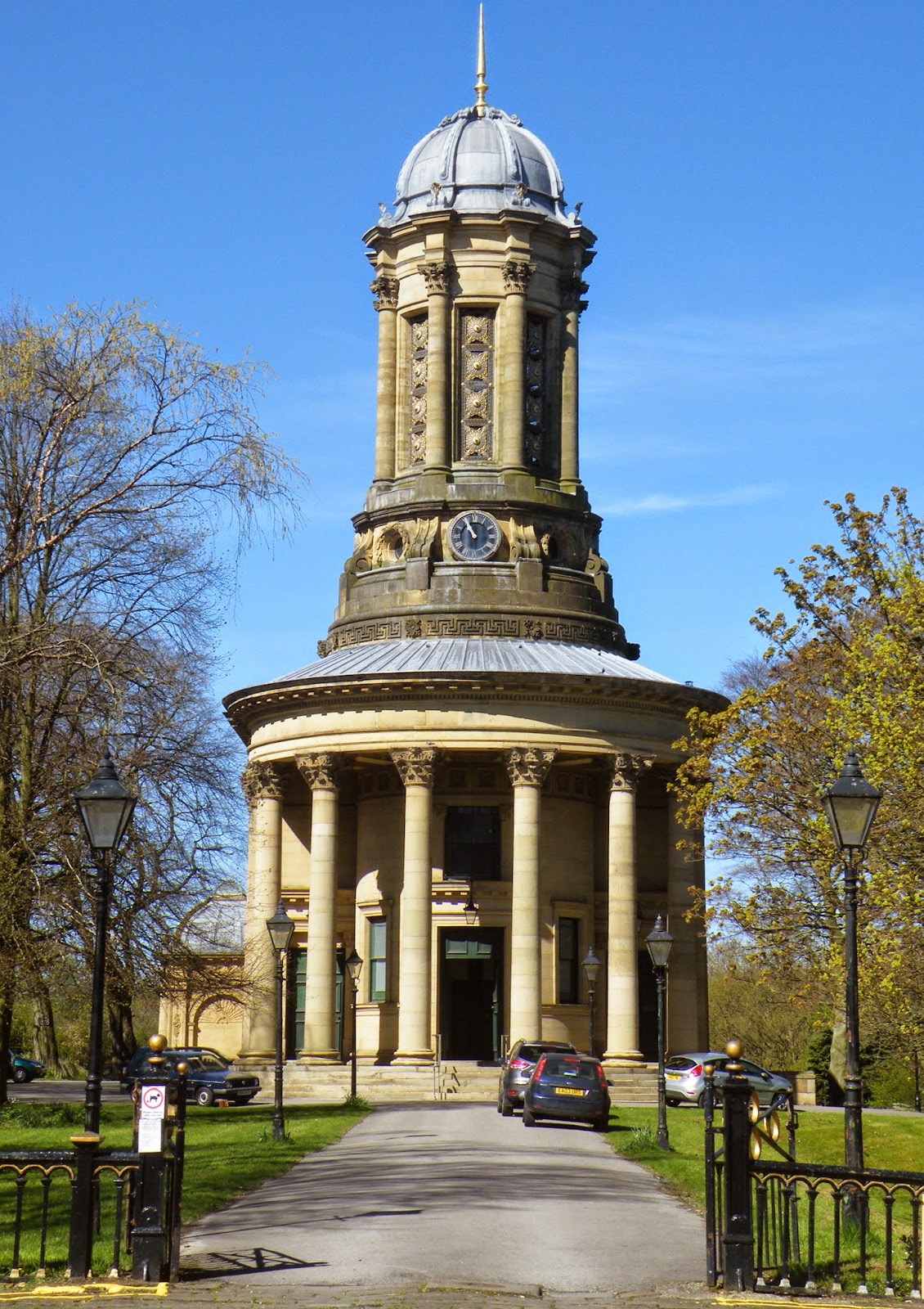 Here is the fine Italianate Church built by Salt for his workers to stay on the right side of the Lord.  Like most of the public buildings it is a fine work of architecture. 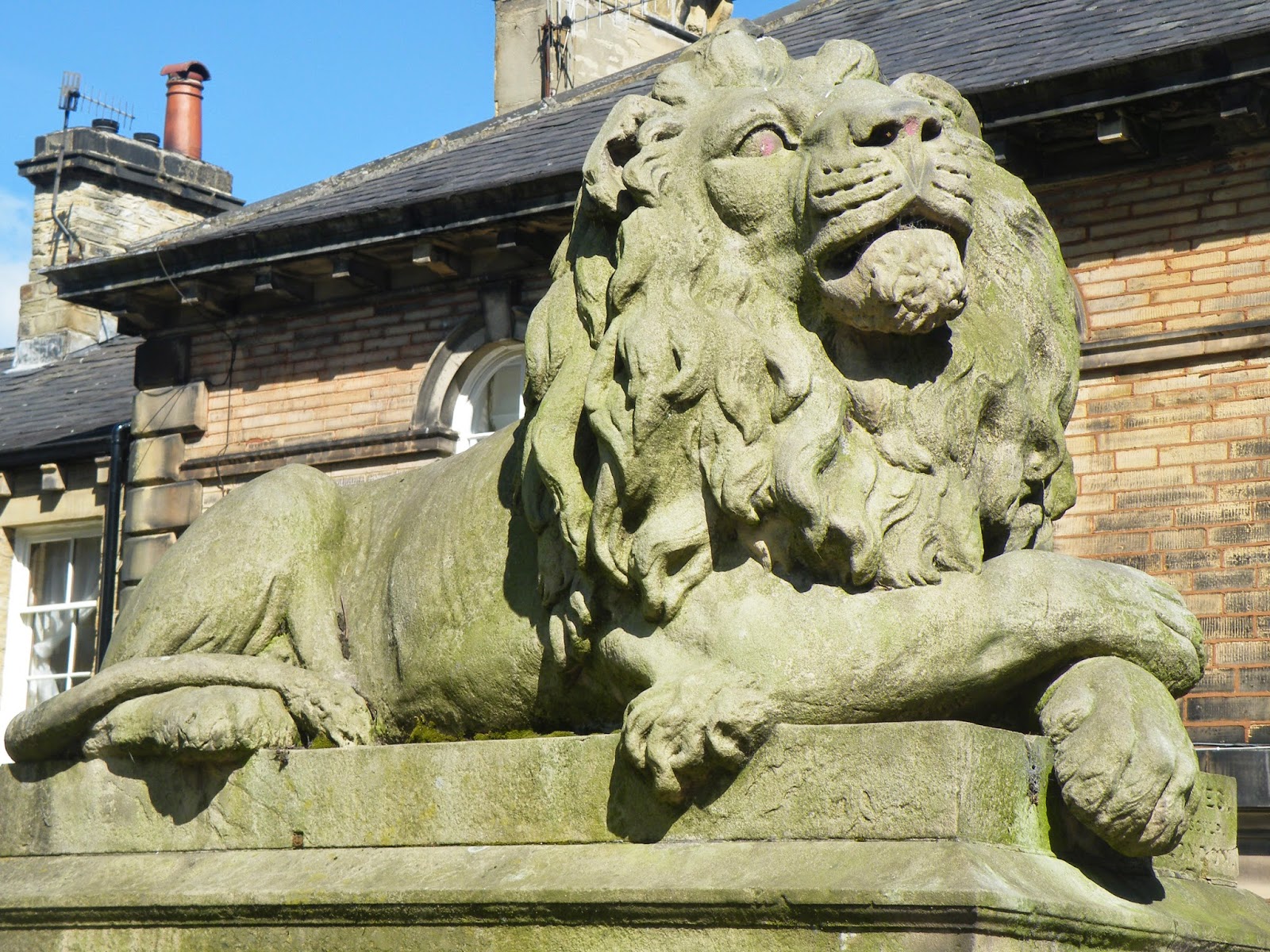 As we cruise on Leo we have a thing about lions.  We liked this chap with his arms crossed and a rather supercilious look on his face. 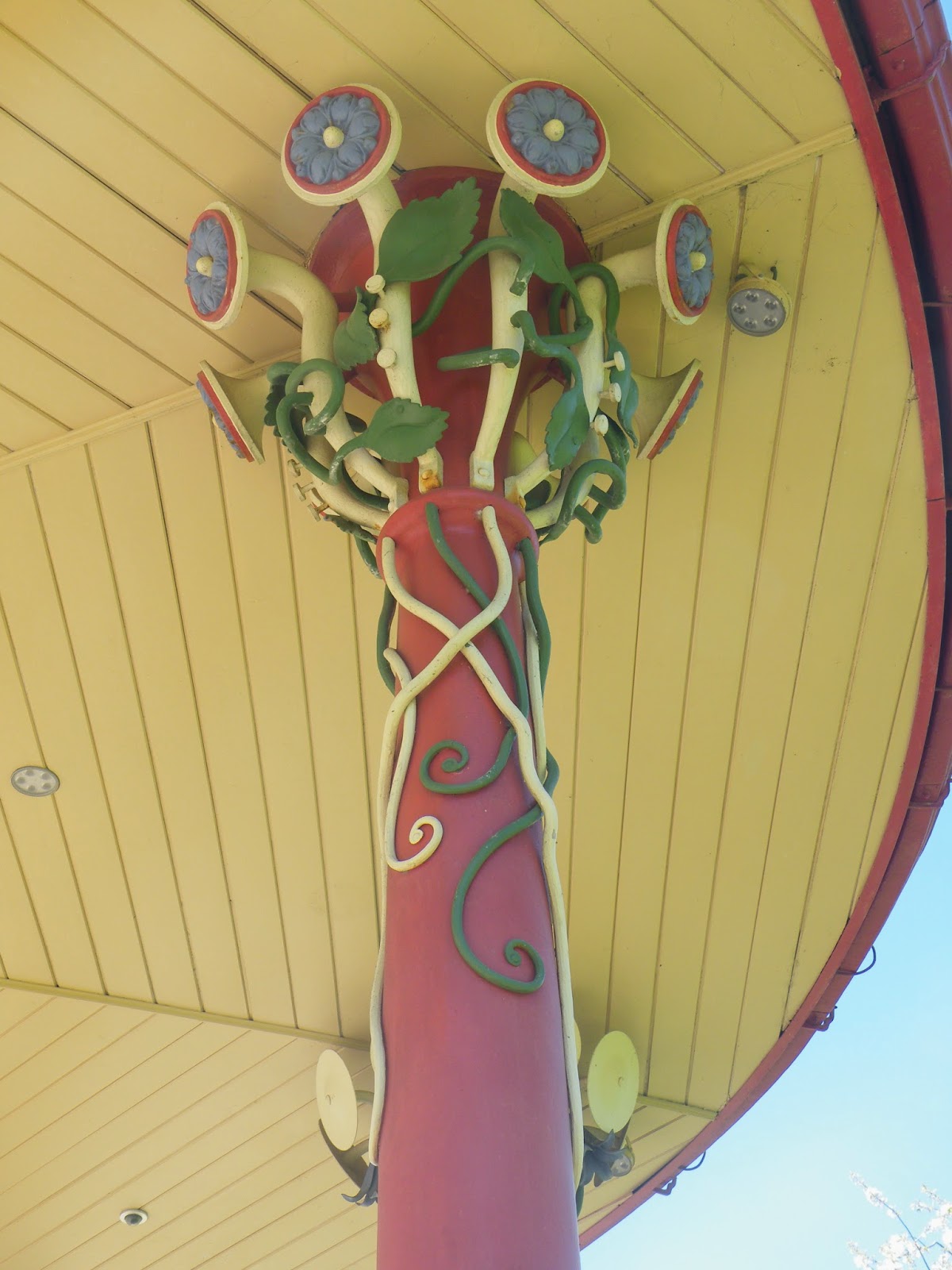 In Robert's Park in Saltaire which is beautifully kept, is a band stand and this photo is one of the columns supporting the roof of the bandstand.  Each column represented a musical instrument with flowers and creepers intertwined.  Here some sort of trumpet or euphonium is mixed with a creeper and flowers.  All wonderfully picked out in coloured paints. 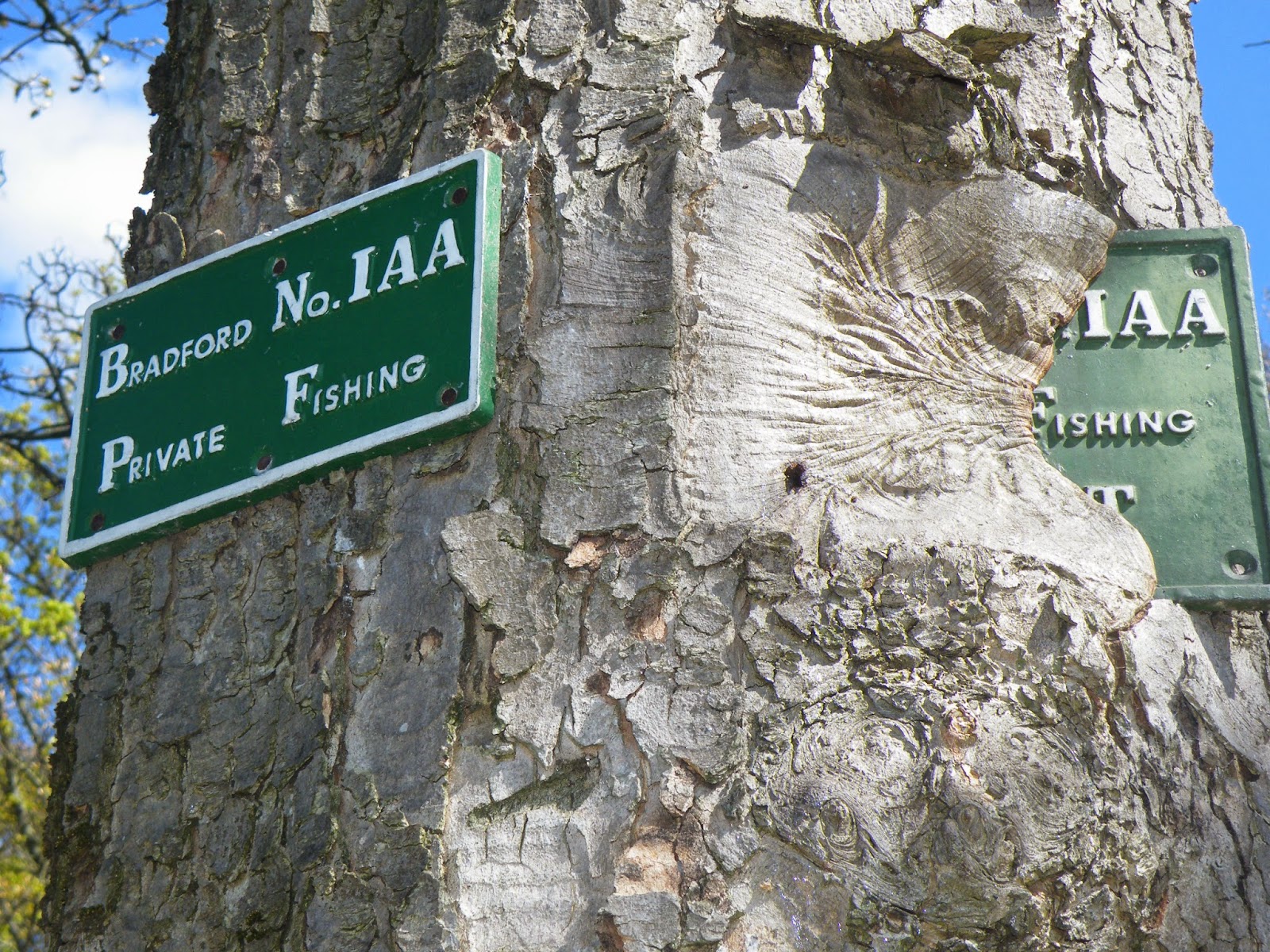 This was also in Robert's Park.  Look how the growing tree has 'eaten' the first Bradford Angling sign which has now been replaced. 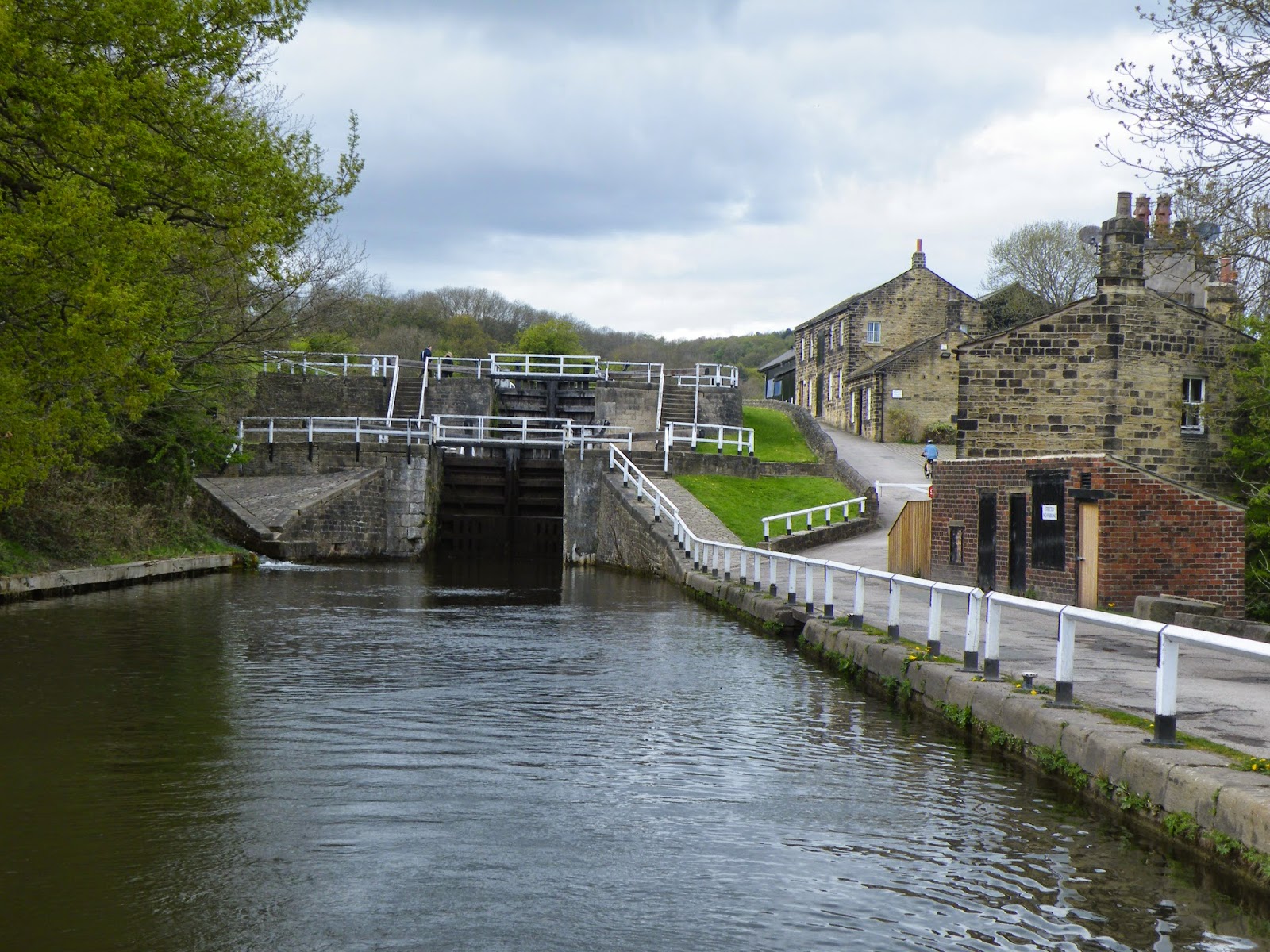 Here at Dobson Locks is a double staircase.  No lockkeeper here - you have to do it all yourself.  Not too difficult with a double, just have the top one full and the bottom one empty to start going down.  A triple is more complicated.

This morning we set off early at 8 am and came down the final 13 locks and 7 miles into the centre of Leeds.  This route passes through some fairly dodgy areas of the city and the strong recommendation is to get through before midday when the drunks start stirring and taking on board their next skinful.  We came through the swing bridges from Rodley and down the locks with 'Judith N' Me' (Judith and Robert) and it was so much easier having a boat and two more friendly people to share with. 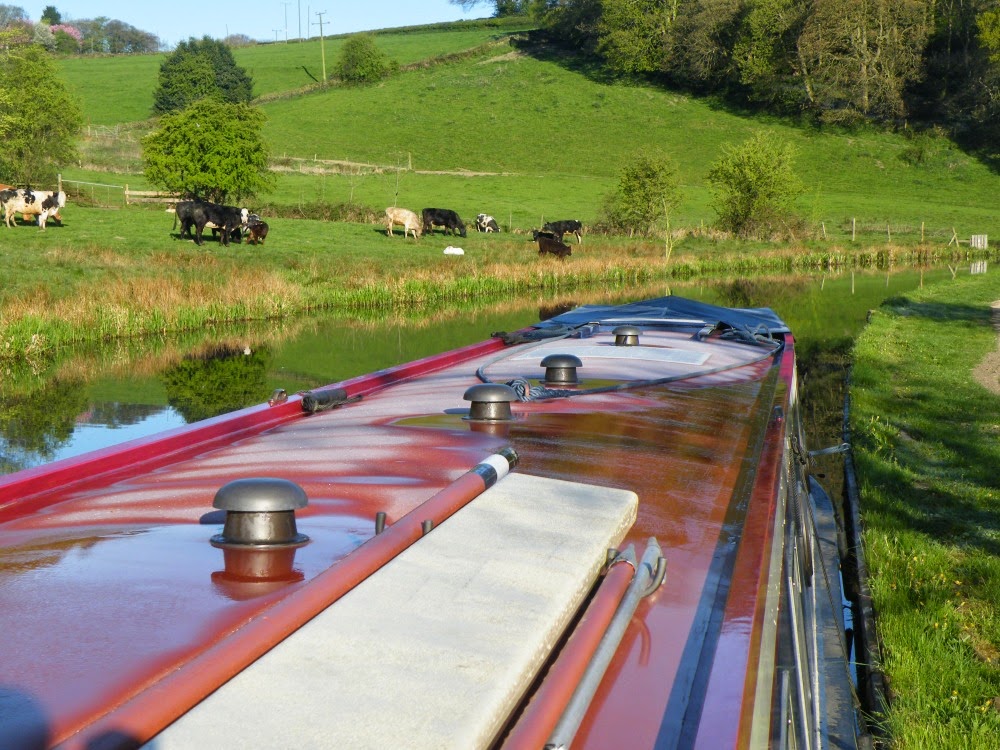 It was cold last night - look at the frost on the roof of the boat.  Fortunately it was not this cold inside, indeed the residual heat from last night's fire made it quite warm even this morning. 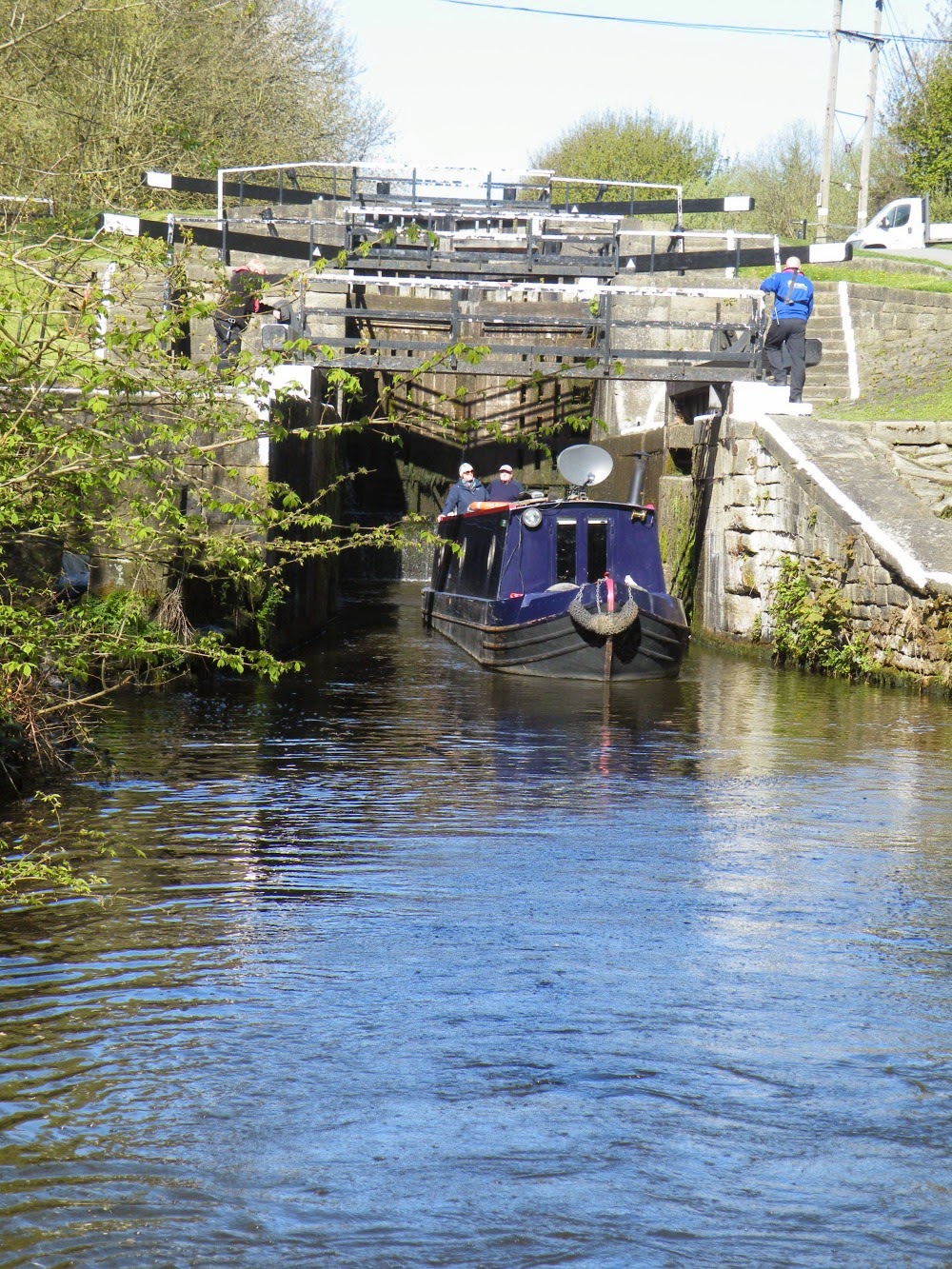 Here you can see 'Judith N' Me' following us out of the bottom lock of the Newlay staircase of three locks.  Here there were two lock keepers, at the following triple staircase of Forge locks there was one and then we were on our own. 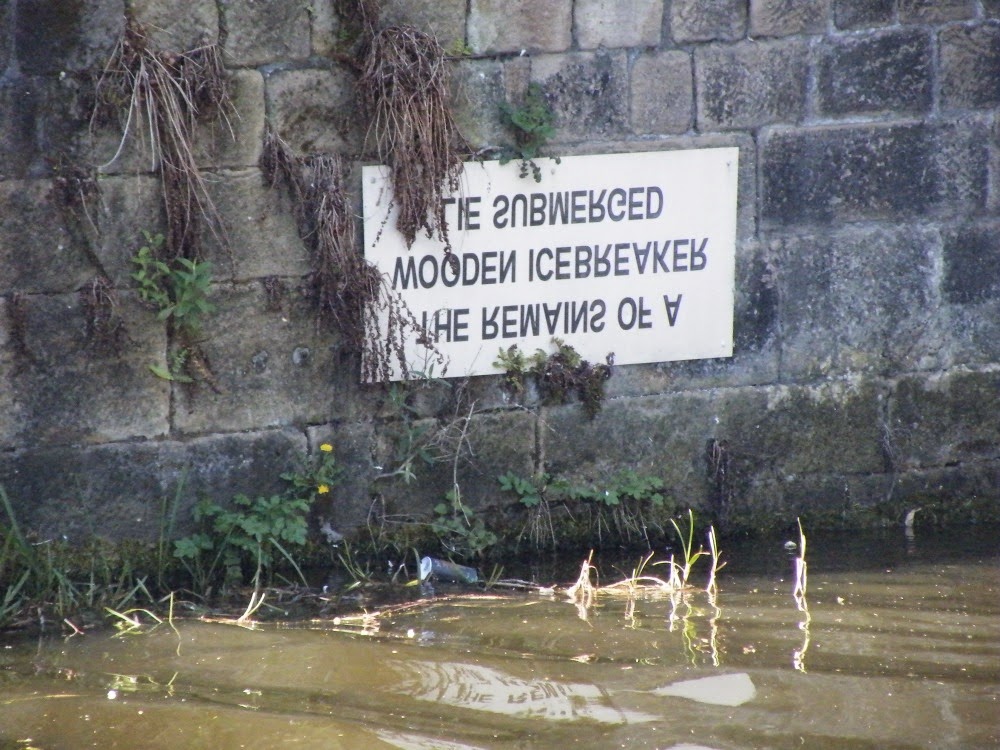 We'll leave you to work this one out.  Worth saying though that I have not worked any sort of editing fiddle to achieve this effect - this was really what was there. 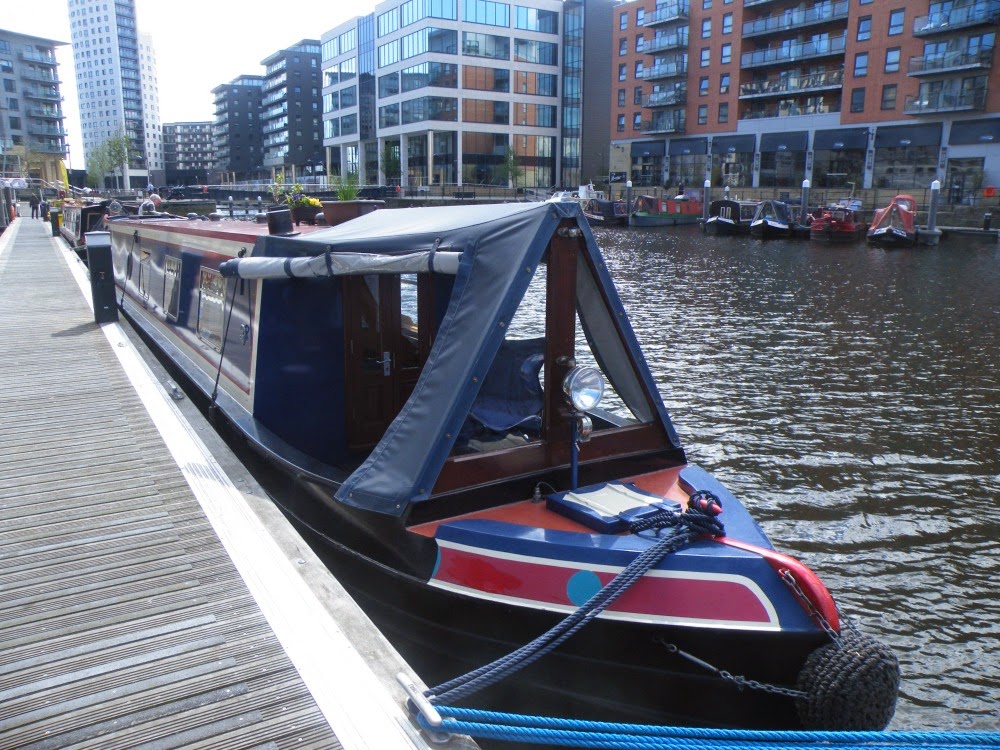 We left 'Judith N' Me' moored at Granary Wharf and we came down the final lock of the Leeds and Liverpool onto the River Aire and here we are moored at what everyone knows as Clarence Dock, just beside the Royal Armouries in Leeds.  They are now trying to call it 'New Dock'.


We walked into Leeds this evening and had a nice meal at Bella Italia.  Just got back to Leo before it poured with rain.

In the next few days we'll head down the Aire to Castleford and Ferrybridge before turning South and East towards Goole.  It is good to be back on the water, but boating is tiring so it's off to bed now at 9.30!!
Posted by Ian and Helen at 13:40 No comments:

A Mini-cruise for Easter

We have been harbouring a wish to go back up to the Bends near the summit level of the Leeds and Liverpool and, as we are heading back the other way towards Leeds for our summer cruise, we decided to go up there for a few days over the Easter weekend.  In fact we had been intending to go a few days before, but the wind was horrible so we stayed at home and finally left our mooring late on the Wednesday afternoon before Easter.  We cruised through Skipton and stopped at a popular mooring with our fellow moorers at Snaygill.  This is called Roy's Seat. 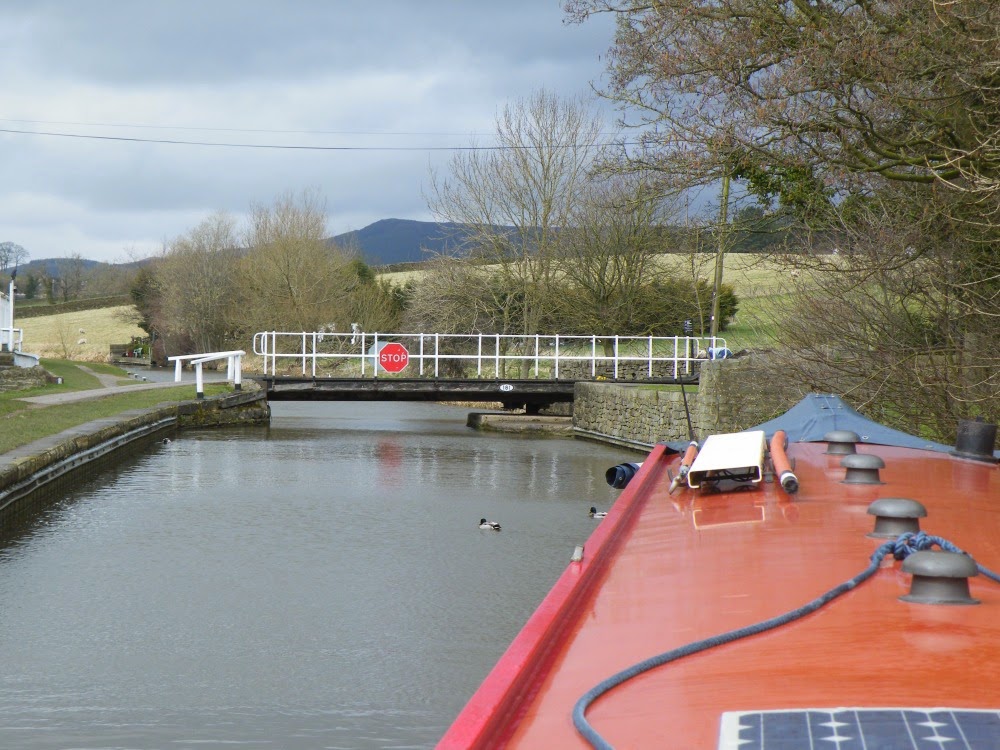 This is Snaygill Swing Bridge which is the first one we met.  There are six of these on the stretch up to Gargrave and one in particular was almost impossible to open on our return trip.  This one was OK and Helen could manage it on her own while Ian steered Leo through. 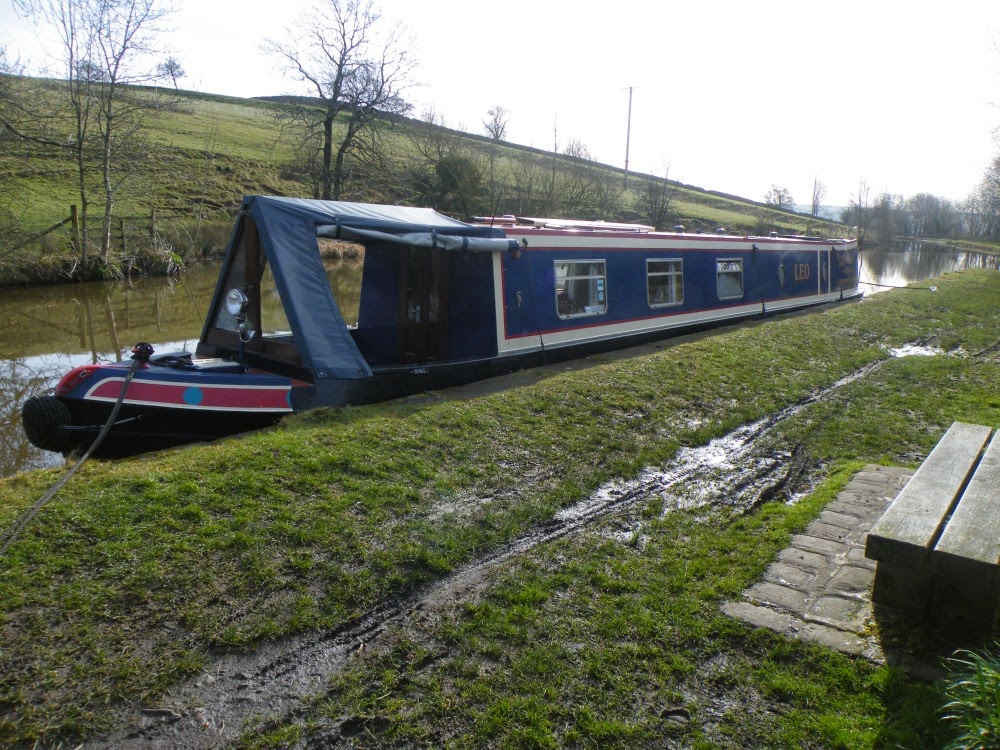 Here we are moored by Roy's Seat.  We have been told this has been erected as a memorial to a local chap who used to walk his dog along this stretch of canal.  It is a useful spot for painting the side of your boat, especially as there is a winding hole close by where you can turn the boat round to do the other side.


On Thursday we carried on through more swing bridges to meet the first of the six locks around Gargrave. 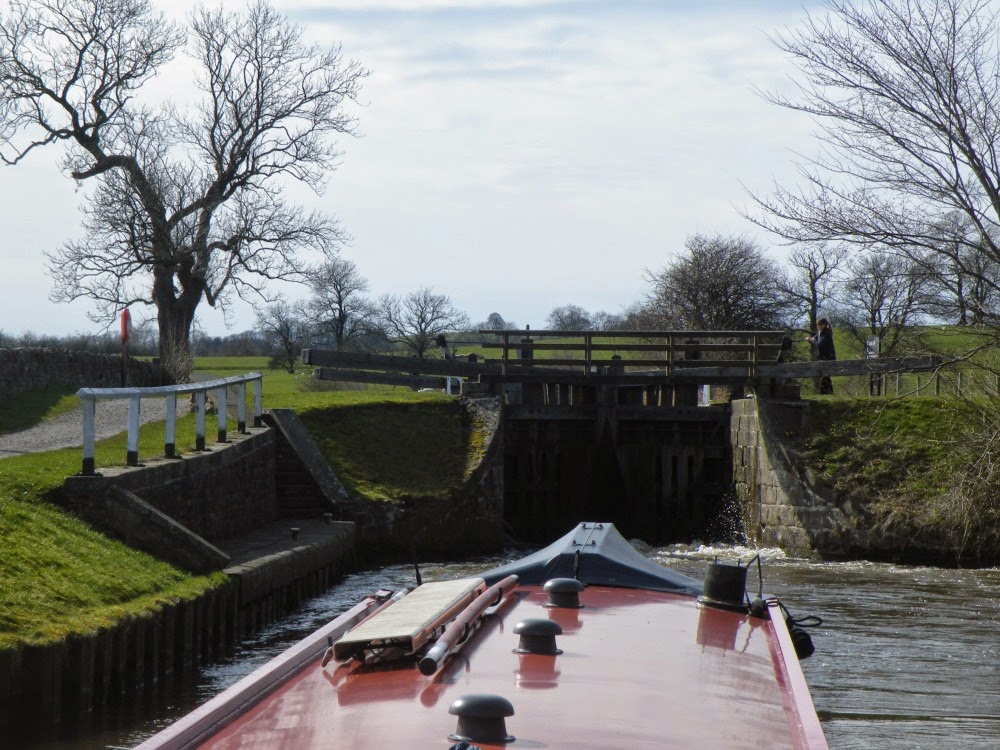 This is Scarland Lock heading out of Gargrave.  We stopped to have a look round the village and saw a couple of houses that we had considered to buy two years ago when we moved up to Yorkshire.  One was still for sale! 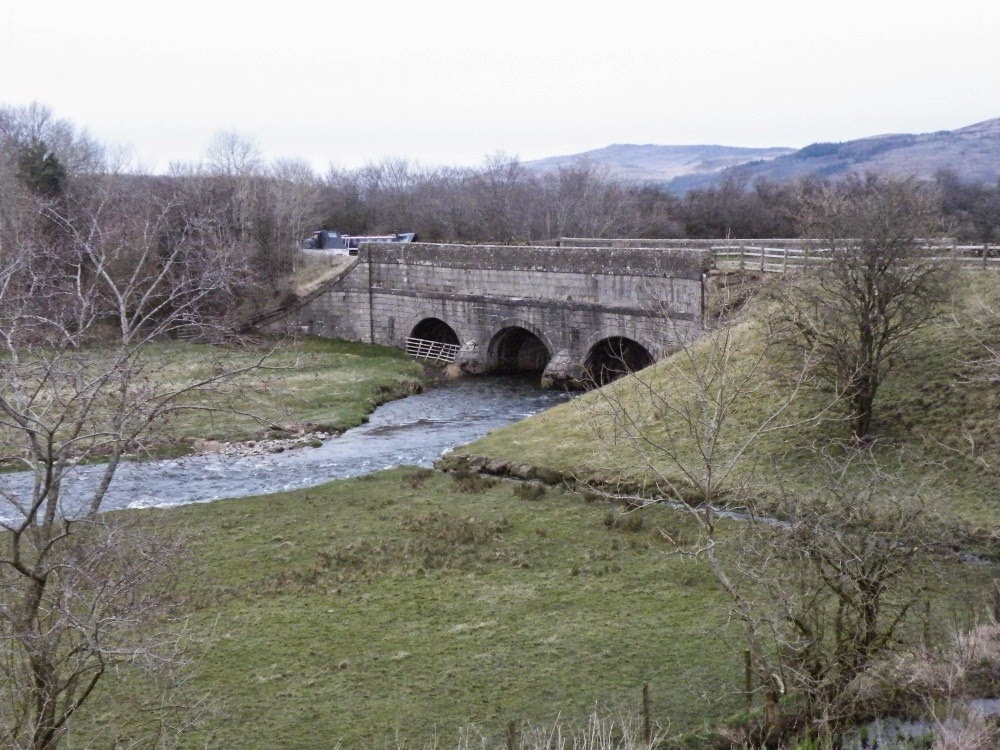 We were heading for a favourite mooring by Priest Holme Aqueduct where the canal crosses the River Aire for the last time and then climbs the Bank Newton Locks out of the Aire Valley.  You can see the Aqueduct in the picture and just make out Leo to the left of it.

On Friday we ascended the Bank Newton Locks with the help of the relief lock keeper, Edward.  We soon got up to our son David's favourite mooring on the Bends.  This is a stretch of canal that zig-zags around a series of high valleys in beautiful countryside with extensive views. 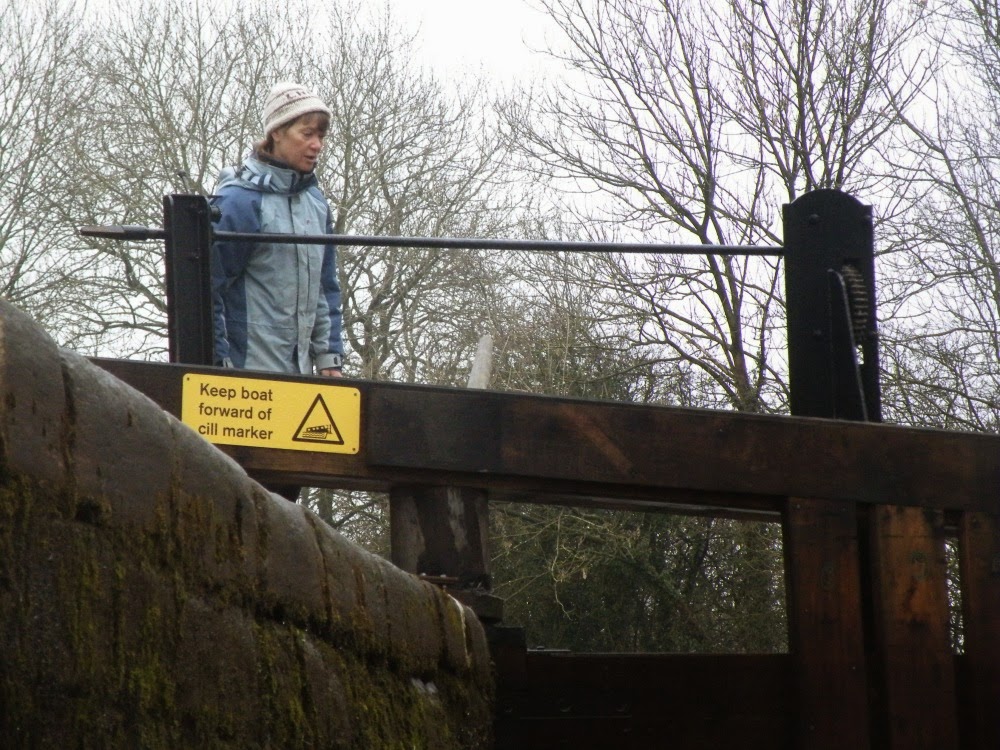 The Bank Newton Locks have curious ground paddles with a long lever that you can just see to Helen's right behind the lock gate.  Helen is concentrating on checking the flow of water into the lock so that Leo is not swamped. 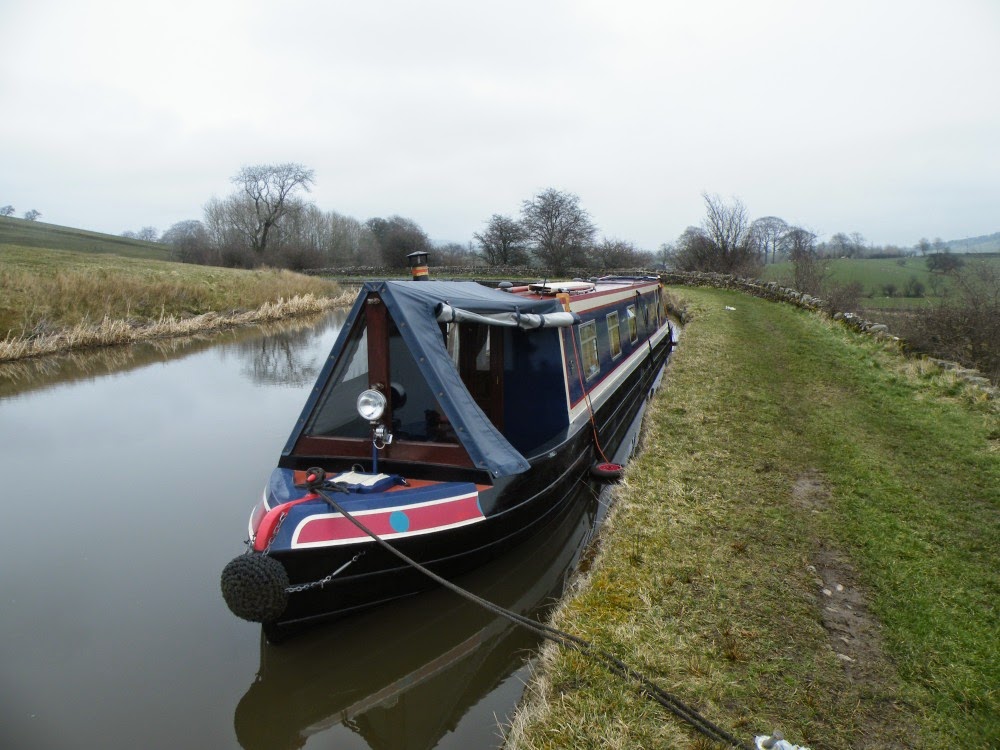 Here we are moored on the Bends. 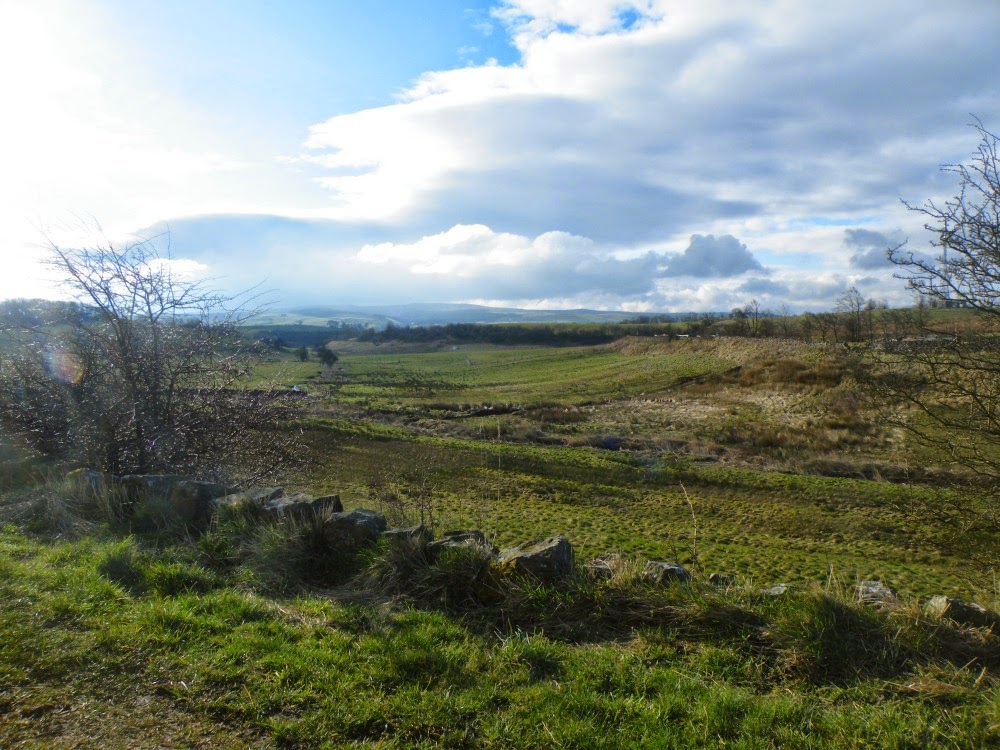 This is the view from our mooring looking towards distant hills at Elslack Moor between Earby and Skipton. 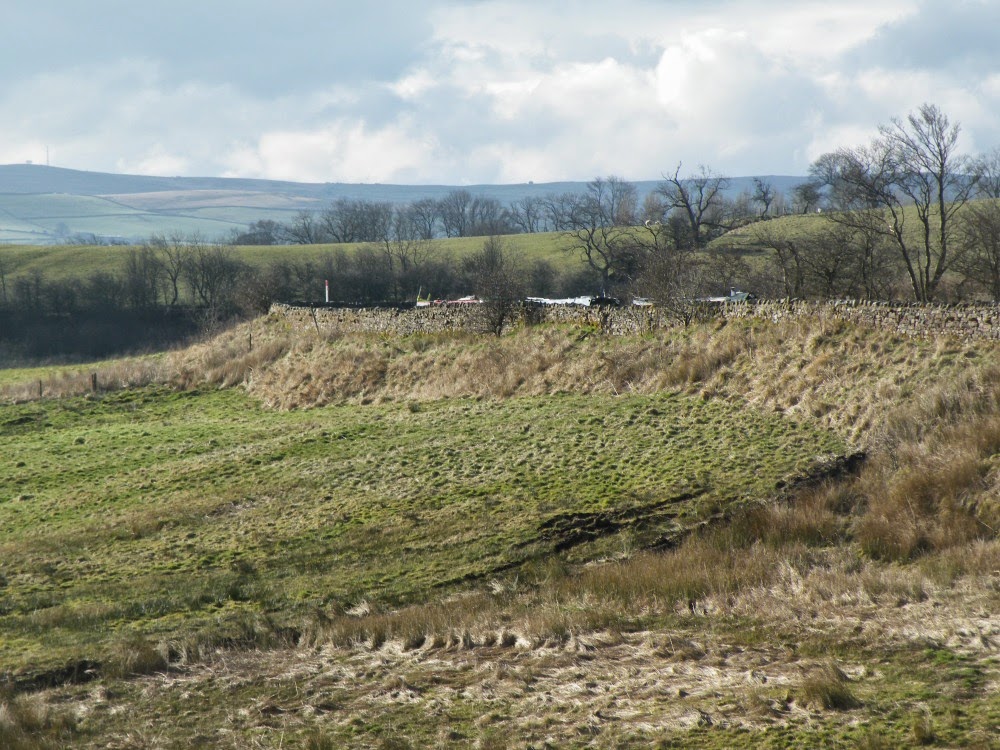 Here a slightly different view shows the next bends of the canal.  On the first bend you can see some boats moored and the further bend is among the distant trees.  We did some boat jobs in the afternoon and then had a short evening walk on the Pennine Way, returning along the canal talking to the several moored boaters enjoying this lovely spot.


On Saturday we went round the Bends to East Marton and a little further to a winding hole before heading back down the Bank Newton Locks to moor overnight on the edge of Gargrave. 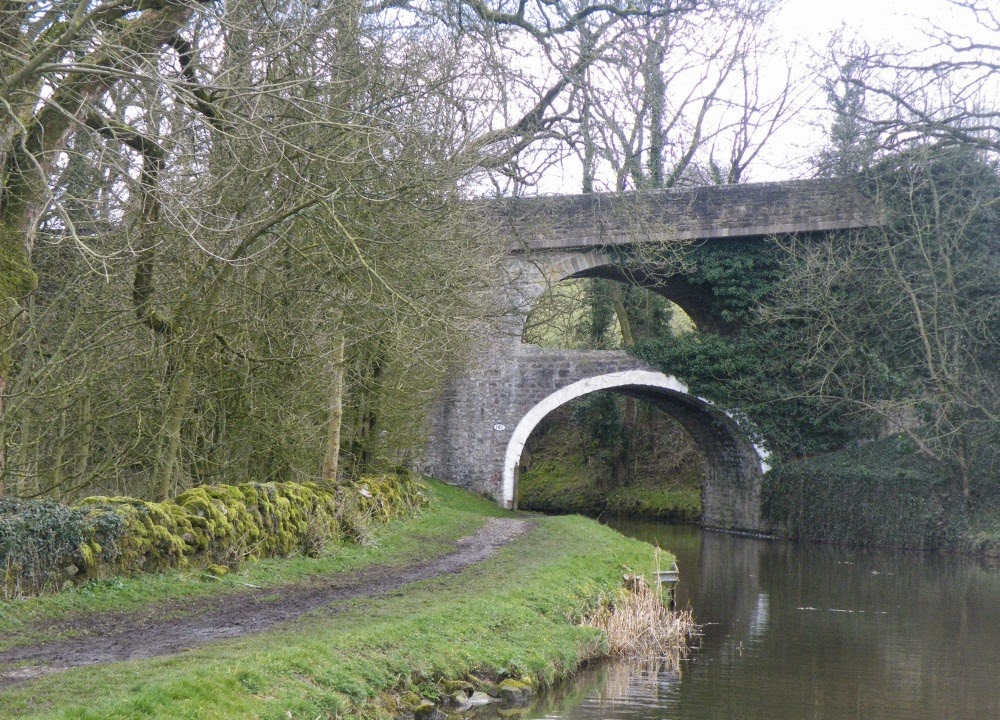 East Marton is well known for this interesting double bridge.  Last time we came this way we visited the Cross Keys in the village but we were too early in the day this time. 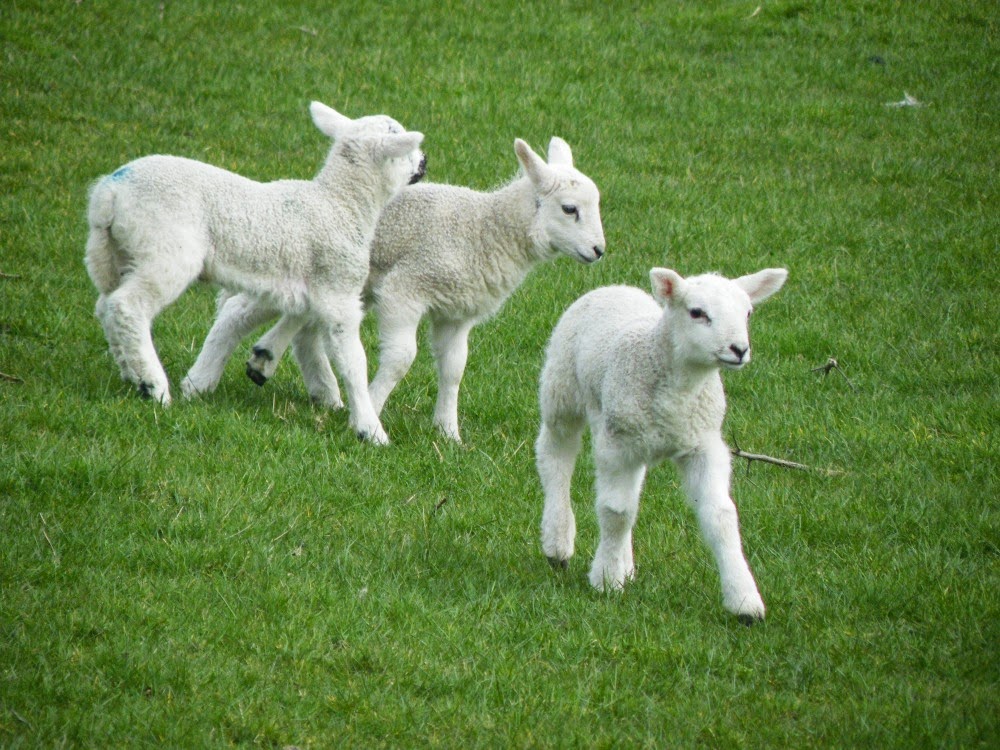 While Ian spent the afternoon touching up the paint along the hull, Helen concentrated on taking photos of these young lambs.


Sunday was our last day cruising back to our mooring on the South side of Skipton. 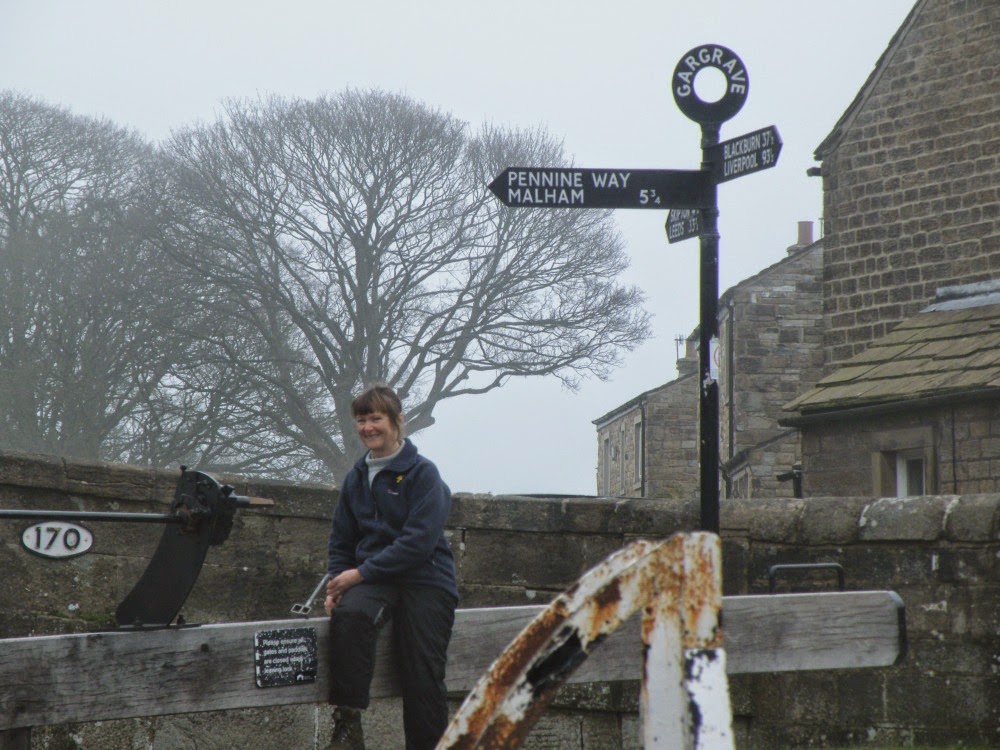 Coming through the Gargrave Locks you cross the Pennine Way.  Helen and Ian have both walked its whole length quite a few years ago. 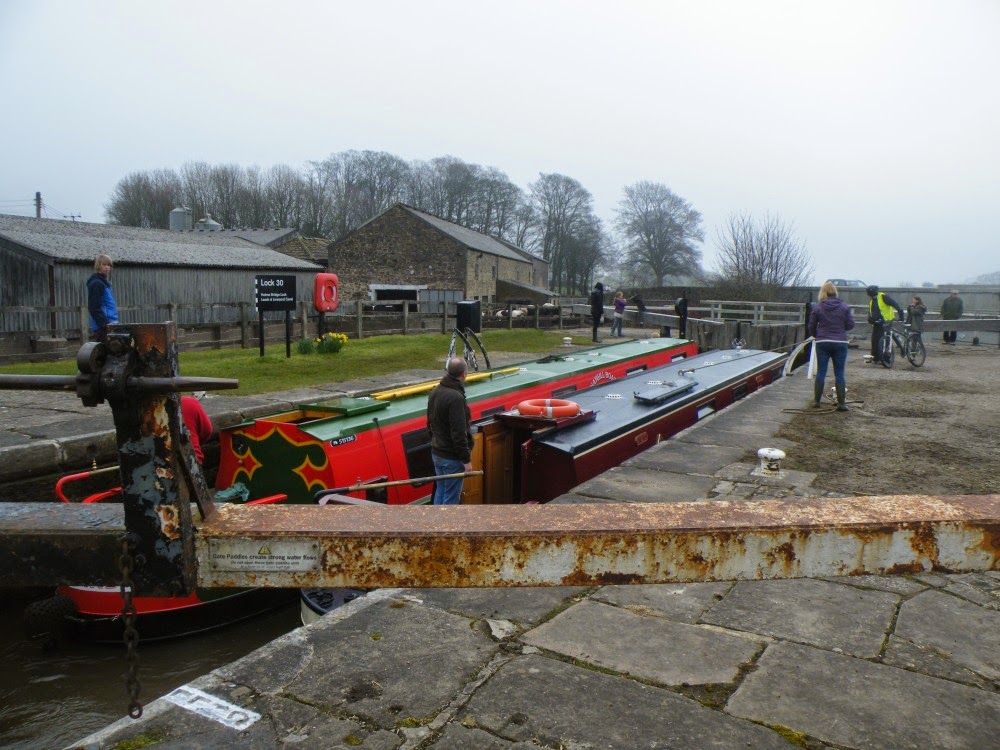 At the last Gargrave Lock we had to queue for the lock.  This is a most unusual situation on these Northern waters, but it was Easter weekend.  Here two hire boats from Snaygill and Silsden go down together while we wait above. 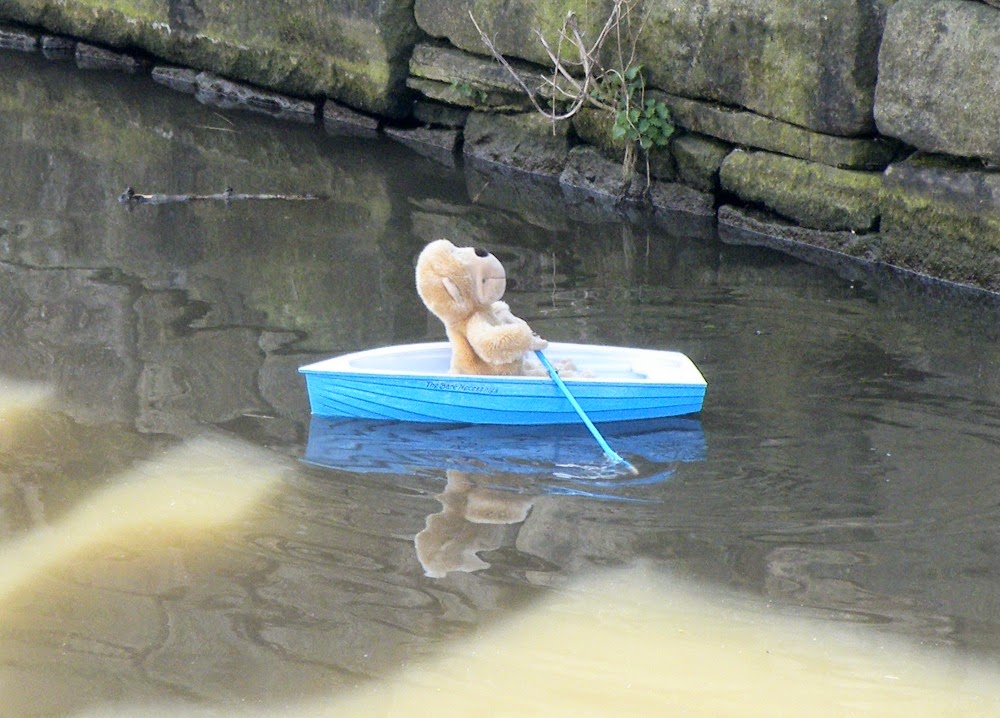 As we cruised through Skipton we passed this fellow.  A toy monkey rows the boat, controlled by radio control from the bank. 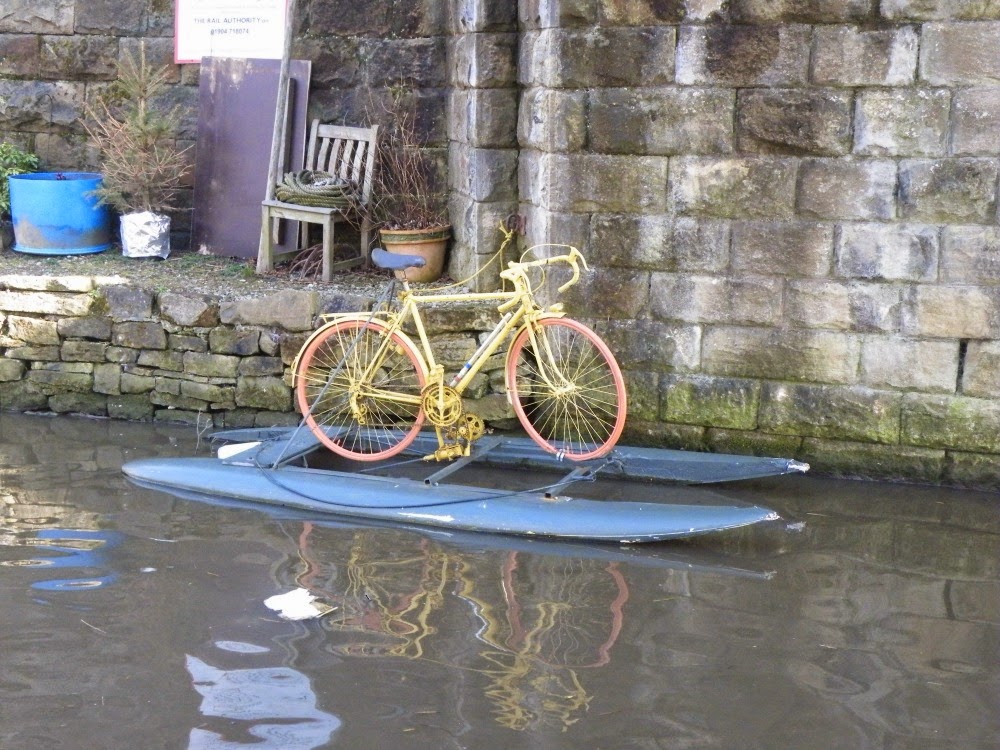 And how about this bicycle?  The chainwheel is linked to a shaft drive which turns a propellor at the back of the floats.  It would have been fun to see it in action.

We were pleased to find that Leo was working well on this trip and we are now looking forward to setting off for the summer, hopefully on 24 April.  The only remaining job before we go is to replace the onboard washing machine for one that actually works!  Two more weeks as landlubbers and then we're off!!
Posted by Ian and Helen at 05:18 No comments: