Thinking about boating for 2018

We drove down to Leo yesterday after a couple of months away in Hawaii and New Zealand and found our boat in a surprisingly good state after the bad winter weather we've heard about.  Her tank is now filled with water, the bed is made up and the curtains are back up, so she looks much more homely. 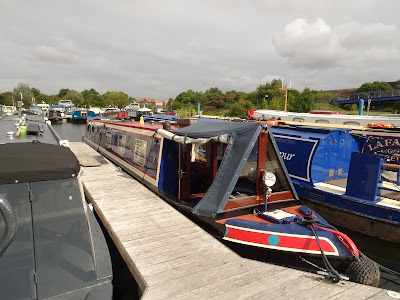 Ian has spent quite a while over the autumn trying to make the suction toilet work properly.  At the end of last season it refused to retain its suction for more than a couple of minutes at a time.  In the end Ian fitted a switch so you could turn the flaming thing off when not in use!  So, after having the sucking bit and cassette in pieces at home, replacing seals and refitting it on Leo including reassembling the cupboard it lives in, yesterday was the moment to test it.  Imagine Ian's delight when it all seemed to work properly.  So fingers crossed we will have a fully functioning toilet if you come and stay on Leo this year.

Everything else seemed to work too, no water leaks, the engine started first time and no water in the bilges.

We have an odd start to boating this year.  First Leo will set off for just a few days in the middle of April to travel up the Trent to the Erewash Canal where her bottom will be blacked in the last week of April.  We will then collect her and leave her for a further week somewhere nearby while we visit friends in the West Country by car not by boat.

So we reckon we will finally set off in the second week in May.  So, where to go?  We have no firm plans yet but we are talking about basing ourselves mainly in the Midlands.  We have a wish to visit Stratford (Warwickshire, not East London) again and the River Avon so that might be a first journey.  After that who knows?  Perhaps we'll fill in some of the less desirable and uncruised (by Leo so far) bits of the BCN and maybe the East Anglia waterways too.  One way or another we hope to see friends both boating and land based sometime over the summer.